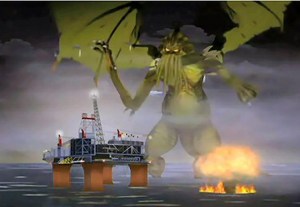 Trey Parker and Matt Stone, the incredible minds, talents, and voices behind South Park have done it again with Season 14, Episode 11, “Coon 2: Hindsight.”

The Lovecraftian elements are not the only storyline in this episode, but as a life-long Lovecraftian, seeing Cthulhu on South Park has made my day!

TOTAL SPOILER ALERT! DO NOT READ THIS OR LOOK AT THE SCREEN CAPTURES BELOW BEFORE WATCHING THE SHOW ON HALLOWEEN!

BP Oil, now renamed as DP (Dependable Petroleum) Oil drills into the ocean floor and rips a hole into another dimension; unleashing Elder Ones, Shoggoths, and more Lovecraftian horrors onto beach-goers, fishermen, tourists, and the rest of the unsuspecting public. 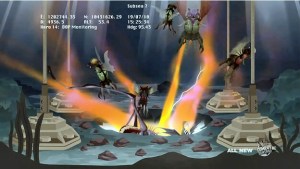 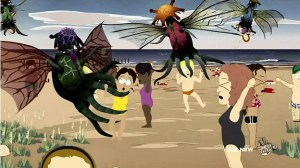 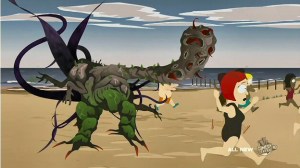 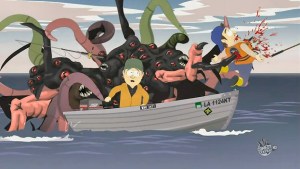 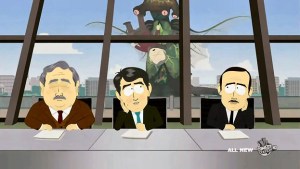 DP Oil, in their obviously uncommon wisdom, decides to drill into the Moon to use the gravitational shift they will cause to help create ocean swells and seismic forces that will help them close the dimensional portal.

But what they end up doing instead is unleashing (waking?) Cthulhu himself; which leads to the following commentary from a newscaster:

“This time they appear to have unleashed the dark and mighty Cthulhu. The rise of Cthulhu from another dimension brings about 3000 years of darkness Tom, where we will be driven to madness and made to serve as Cthulhu’s cultist slaves.”

With the newscaster’s final remarks being:

“Praise the Dark Cthulhu! Long may he reign!” 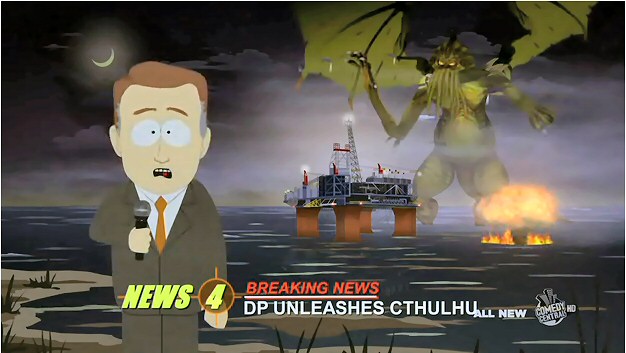 Television just doesn’t get any better than this!

Many, many Thanks for the initial tip about this episode from Bill L, aka Rhine Frank, of the HP Lovecraft Yahoo newsgroup.

Update: There is a great clip of Cthulhu from this episode at: http://io9.com/5675723/bp-oil-gusher-unleashes-cthulhu-on-south-park

Update 2: It’s a Trilogy! The latest episode of South Park, S14E12 Mysterion Rises, is part two; with far more Cthulhu and the Necronomicon. And next week’s episode will be the concluding part three. An amazing feast of Lovecraftian madness!

This site uses Akismet to reduce spam. Learn how your comment data is processed.